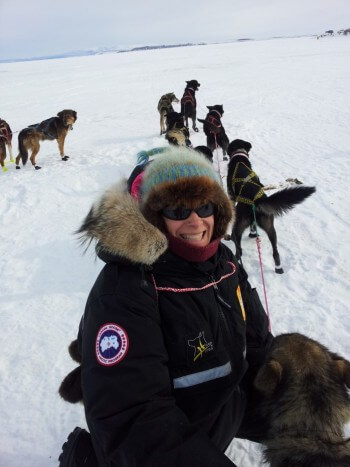 We are proud to announce that we will be sponsoring Heidi Sutter and Darrin Lee of KMA Kennel in Chistochina, Alaska. KMA Kennel is currently home to 25 happy huskies.

Heidi has been teaching both regular education and special education, specializing in working with children diagnosed with autism, emotional disturbance as well as severe behavioral issues, for over a decade. Heidi is also the proud mom of Emily, who is 17 and will be graduating high school this year.

Darrin has been a musher for almost 20 years. Darrin, a retired school teacher, completed the Yukon Quest in 2013. He has also competed in many other races such as the Kobuk 440, Yukon-Innoko 200 and the Cooper Basin 300 numerous times.  Heidi is officially signed up to run the 2015 Iditarod Trail Sled Dog Race. A 1000 mile race that begins in Anchorage March 7th, 2015 and finishing in Nome with the winner crossing the finish line 8 days later.

Heidi: our dogs are not only used to race, but are used for work as well. We use a traditional, homemade freight sled to hail wood which is used to heat our cabin. We also travel the country by dog team. When Emily was younger, we would use the dog team to go Trick-Or-Treating to our neighbors. We have also used the dogs to run a trap line, to haul water and supplies. Having dogs is not a hobby. It’s our way of life.