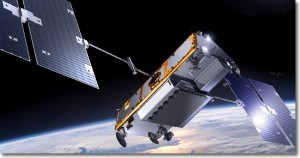 Satellite communication plays an increasingly important role for ocean sailors.┬ĀSending or receiving email or text messages or keeping your blog. In addition, down loading GRIB files or routing information becomes a piece of cake.
Sailor Joshua van Eijndhoven sends his weekly columns to various media via an Iridium GO from the middle of the Pacific Ocean and not too large photo files are also not really a problem anymore.
Meanwhile, Iridium is working hard on her new network ŌĆ£Iridium NEXT ŌĆś.
The new network consists of 72 satellites (of which there are 6 in standby) floating approximately 800 km above the Earth. A mini terminal as the Iridium GO will profit extremely of th coming services.
Data rates of 128 Kbps will increase to 1.5 Mbps. and with the application of IP Technology, there are unprecedented opportunities.
When all satellites are in ŌĆś orbit ŌĆś they will create a dynamic network as satellites will communicate with each other. So that e.g. natural disasters as hurricanes, earthquakes or tsunamies will no longer have any influence on their perfect and high-speed operation. And all that at the same cost. The first satellites will be launched end of 2015.
We still only have to wait until 2017.