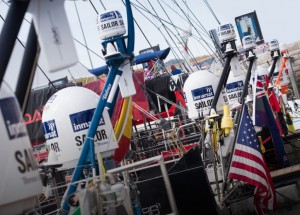 100 television and digital broadcasters lined up to showcase the 2014-2015 edition of the Volvo Ocean Race.

Volvo Ocean Race organisers recently announced that around 100 television and digital broadcasters â€“ and counting â€“ have so far been lined up to showcase the 2014-2015 edition of the race.
Broadcasters will have access to a new 39-part weekly half-hour show plus special short bespoke features and the nine-month event will also be capturing the leg arrivals, departures and in-port races live for digital platforms. In the last raceâ€™s independently audited report (2011-12), more than 1.5 billion were estimated to have seen race coverage on television.

The delivery method for all this video content?Â

Well, it starts with Cobham SATCOMâ€™s SAILOR 500 FleetBroadband, which gives each Onboard Reporter access to the Internet, so they can deliver their videos and stories to VOR HQ.

SAILOR 500 FleetBroadband has been on each and every Volvo Ocean boat since the 2008-09 edition and has helped to revolutionise the way fans follow the race. By providing a reliable satellite link, with sufficient throughput for video delivery, we all get to see life at the extreme through the eyes of those living it.

Before satcoms came to the Volvo Ocean Race, getting video from the boats was a far more laborious and risky affair. There have been many delivery methods, from the teams dropping tapes of at special buoys to helicopter collection or even navy vessels coming out to meet the teams at sea during a leg.

Today though, once the Onboard Reporter on each boat has his story in the can, he can just hit send and minutes later the SAILOR FleetBroadband will have delivered the file safely to VOR HQ in Alicante. From here, the story will be distributed to the army of television and digital broadcasters waiting to show their viewers the latest action from the race.

So, delivering footage and news from the high seas is now much simpler, and is of course a team effort. But the Onboard Reporters, race organisers and broadcasters are all relying on SAILOR to keep transmitting from anywhere in the world, even in the most extreme conditions.

History shows that it does just that, so we can all look forward to gigabytes of exciting footage from the 12th Edition of the Volvo Ocean Race.